A hundred years ago, five different train lines ran through Noble County. One of the more familiar lines was the Grand Rapids & Indiana Railway. A spur ran right into Rome City which was often referenced as the “Fishing Line” since many people who rode this line were coming into town to relax and enjoy some recreation on the lake.

Over the years, railway companies closed and moved their lines elsewhere, leaving only two main lines that now run through our area. We are all familiar with those lines today, but one can hardly imagine what things would have been like with all that rail activity.

As the rail lines shut down, the ties and rails were removed leaving the rail bed to succumb to nature. Through the years, trees and shrubs grew up in these old beds creating tree lines that still crisscross the county today. Landowners adjacent to the rail line replatted their properties to include this abandoned land. Some used it as hunting ground, others utilized it as a dumping grounds and some of us used them to spend the summer days exploring and looking for treasure.

In 2010 a group of like-minded folks got together to see if there was any interest in creating a trail system. As the group did their research and began looking for ground, the old GR&I railroad bed came to mind. Since the land was already owned by several families & businesses, the group knew they had a long trail ahead of them.

As the newly founded Noble Trails began doing their research and started reaching out to the community, they found there were opinions on both ends of the spectrum. Some people were thrilled with the idea and others not so much. It took a lot of patience and hard work to really get moving on what needed done. The Indiana Department of Natural Resources and the cities of Kendallville and Rome City began working with Noble Trails on land acquisition and figuring out the best route for the trail to follow in places where the rail bed was not available.

As the years went on, more and more land was acquired through grants and fundraising. Sections of trail were getting longer and longer as more people saw the potential. The first section was paved near the Gene Stratton-Porter State Historic Site. What better place to get people excited about getting outside than the home of Indiana’s most famous female naturalist? Walkers, bikers, and hikers would get on the trail from the site and walk through the same areas Gene did on her excursions. The trail goes along a prairie, near a 100+ year old barn and even runs by a swamp, all highly treasured areas. And that is just in the first mile! As more trail sections opened, people became able to easily walk along the edges of farm fields, a creek and even to an ice cream parlor.

This idea that started with a group of people with a dream has grown into a 10-mile paved path that now connects Rome City to Kendallville known as the Fishing Line Trail. This stretch of trail is a great way to get out and see what this group has been working hard at over the last ten years. It is very easy to access via several parking lots & access points and gives people a chance to experience the beauty that is Noble County. The number of visitors to the trail daily has continued to increase as the word gets out.

Several species of migratory warblers have been spotted in the treetops along with fox, deer and wild turkey using the trail so keep your eyes open. Benches have been created through a plastic cap collection and will be placed at a future date along the trail. Trail markers are in the works and a wonderful group of trail stewards are helping to keep an eye on things.

Noble Trails continues to look to the future and expanding the trail to the north and south of the initial section, connecting nearby communities. If you are interested in learning more about the trail or ways you can help out, please visit www.nobletrails.org. 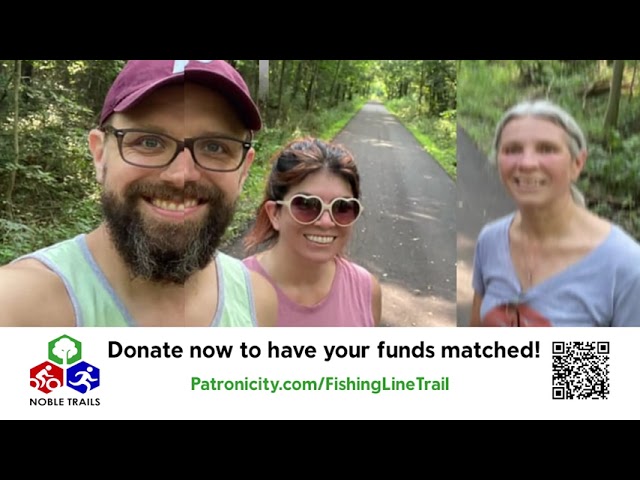